Diary of an MS Relapse Steroids and Some Tough Decisions

Diary of an MS Relapse Steroids and Some Tough Decisions

During a December 2016 trip to Florida to visit relatives, I began having new and worsening MS symptoms that continued into January. I did my best to deny that I was having a full-blown relapse and to hide it from my wife, Kendra. But finally, at 4 a.m. on January 14, we decided to go to the emergency room at Loma Linda University Medical Center-Murrieta, a few miles from our California home.

I was immediately given blood tests and a chest X-ray, and was hooked up to heart and other monitors. The doctor on staff ordered me a 1,000-milligram (mg) dose of intravenous Solu-Medrol (methylprednisolone), which is a standard amount for treating an acute MS attack like this. He asked me some questions, then set up a remote call to an online neurologist via Skype. The efficiency of this hospital blew me away. If they did not have this online system in place, I would have had to stay there until at least Monday, when a staff neurologist would be present.

The thought of being cooped up in a hospital room and hooked up to an IV for days made me anxious, and I wanted to get out and go home as fast as possible. Luckily, the doctor was able to arrange for me to have a second dose of Solu-Medrol as an outpatient the next morning, and then I’d be going to my own neurologist on Monday to discuss how and where to complete the rest of the five-day treatment.

Surviving the ‘Tomb’ of the MRI Machine

Before I left the hospital, though, they needed to do complete MRIs of my brain and spine to make sure the MS lesions had not grown or multiplied too badly to let me leave. MRIs are not an easy procedure for me to endure: I am claustrophobic and cannot lie in that “tomb” without being drugged up.

To keep me calm, 5 mg of Valium (diazepam) was injected via my IV, and I was then put into the MRI machine. But after only 20 minutes, I began to have my usual panic attack, which caused the tech to pull me out of the machine. He explained that if I got up or even moved, he would have to start the first test again. So I waited until the nurse came in and injected another 5 mg of Valium into my IV. Back in I went, feeling no panic, and I made it through the second part of the brain scan. But again the drug wore off, and again I had to be removed from the machine.

Now what? I had already reached the hospital’s 10-mg limit on Valium, so it was time for plan B — namely Ativan (lorazepam) — which put me to sleep.

When I woke up, the tests were over and I was able to go home and come back in the morning for another dose of Solu-Medrol. At this point, the pain and symptoms in my spine had subsided, along with the numbness in my neck and the symptoms of optic neuritis. But my right hand was still tingling.

The next day, January 16, I saw my neurologist at his office. He did his exam and concluded that I was in the midst of a very bad MS exacerbation that needed to be controlled as much as an MS attack can be.

My first and, until now, only major attack was in 2006, and it led to my MS diagnosis. I had waited almost two months to be seen by a doctor after my MS symptoms occurred, and I have had numbness, pain, tingling, and coordination problems on my left side for all these years since. This time, I knew that stalling on treatment was not an option. One mistake like that was enough!

My neurologist prescribed another 1,000-mg dose of Solu-Medrol, so it was back to the ER one more time. The ER we’d gone to originally was now packed with 80 people waiting to be seen, which would mean exposing myself to multiple germs while my immune system was already weakened by the MS attack. Thank God I have a wife who is a registered nurse and can think on her feet. She immediately took me to another ER at Inland Valley Medical Center in Windomar, which was less crowded. I got right in to see the evaluating nurse, who had a doctor examine me and get me onto a bed with an IV drip. The nurse who took care of me in the room sped the drip from two hours to one to help get me out of ER as soon as possible, and I was quickly on my way back home.

While my hospital experience was favorable, Kendra’s experience trying to find out from the neurologist’s office whether I needed another dose of intravenous steroids or just methylprednisolone pills was much less so. Nonetheless, with multiple calls and a ton of insistence, Kendra got the answer and headed to the pharmacy to get my 30-day medication regimen.

Over the course of the next week, I felt little improvement in my symptoms. I experienced numbness and tingling in my right hand, pain and numbness in the middle of my spine, blurred vision, lack of coordination, cognitive impairment, and dizziness, which we suspected was caused by the medication. On top of that, I was having sleepless nights of pins and needles, which I treated with ice packs on my back and neck.

I had scheduled an appointment with an MS specialist to find the best course of action. But no matter what, I did not want MS to change the course of my life or stop me from inspiring others to battle MS through fitness. I was already planning my workouts with my training partner, Josh Bryant, a 30-year-old competitive bodybuilder.

As February approached, I continued taking my steroid pills. I was extremely exhausted but could not sleep more than a few hours at a time due to tremors, pain, and episodes of itchiness throughout my body. I was very anxious to get to an MS neurologist as soon as possible.

Finally, on February 6, I had an appointment with Michael Y. Sy, MD, an MS specialist at University of California Irvine Health. This was a long appointment, where my records and new tests were reviewed, and my history discussed. I was given some options, none of which thrilled me. I was told I could be admitted into the hospital for 10 days for a plasma exchange that might help reboot my immune system, but running a line into my heart for 10 days with no guarantee that it would actually accomplish anything — and risking clotting complications and infections in the hospital — made it a clear “no.”

So the doctor gave me a few choices: the newer MS medications, which have less of a track record and more side effects than some of the older meds; Copaxone (glatiramer), which I had used in 2008 and 2009 with no improvement in flare-ups; or Rebif (interferon beta-1a), a self-injected medication that can cause flu-like symptoms as a side effect. I chose Rebif and waited to receive my medication, and for the MS LifeLines nurse (a service of the drug company) to come help educate me on the treatment. The doctor also prescribed gabapentin, an anti-seizure medication, to help stop the tremors. I started taking it immediately.

Back to the Gym at Last

Five days later, I put my plan to work out into action and started to train with Josh at the gym again. I did 10 minutes of walking as fast as I could on the treadmill for my cardio, which was difficult to coordinate. It was even more difficult to get through my resistance workout, and I needed an ice-cold towel on my neck along with a cooling vest to get past the symptoms.

I was determined to get back to training the way I had before this setback, despite what I had to go through to get there. But this was a mountain to climb!

OK, I think I’ve given you enough of my diary for now. I will update you on my experience with Rebif, the MS LifeLines nurse, and my latest workouts in my next blog. Until then, never quit!

WE NEED YOUR HELP! 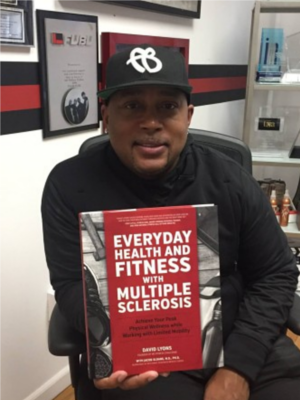 “An important book! Everyday Health and Fitness with Multiple Sclerosis is the first all-inclusive system for the millions of people that suﬀer through life with disabilities, challenges, and roadblocks to getting and staying in shape.” – Daymond John
BUY IT NOW

Tweets by MSFitChallenge
Go to Top